Welcome to my blog

I hope you enjoy reading my posts, and please leave me a comment. I always enjoy reading them, and will try to visit you in return.
For security reasons for me and for you, I would appreciate it if you would leave your name on your comments.

You are welcome to copy any of my designs, as long as you do not take credit for them yourself. I am very happy for you to sell them. If I have used anyone else's design, I always try to give credit where it is due. If I have missed anything, please let me know and I will put things right.

This is intended to be mainly about my crafting stories, as a personal record of what I do. However, I interpret crafting quite widely, not just paper crafting but other things too. I have a butterfly mind and like to change from one thing to another depending on what I feel like on a given day - knitting, crochet, cross-stitch, cards, baking and several others, including my favourite right now, parchment, both traditional skills and Groovi, very relaxing and calming to do.
I have decided to put some structure into my blog so that each day will have something of a theme.
Monday- for Mindfulness; Tuesday - Tidy Up Day; Wednesday - What's on Your Workdesk Wednesday; Thursday - Technique and Tips; Friday - Finish Off Day; Saturday - Start Something New; Sunday - Anything Goes
These themes are not hard and fast and will be changed if I feel the need.

Tribute to a special lady

I am ashamed to see that it is around two years since I posted anything on my blog.  However, I felt that this week was important to come back.  Many of you will already have heard the sad news that we have lost another friend in crafting - Debbie Rock.

Debbie was a talented crafter and a valued friend. I first met her in a caravan at Eastnor Deer Park, just outside Ledbury, Herefordshire.  We were all there to enjoy Land Rover trialling and the great social life around the barbecue in the evening.  Debbie was there because her parents were long-standing club members and her husband, Phil, was the Treasurer.  I remember Debbie's mum, Gwen, was so proud of her daughter's crafting talent, and would show anyone visiting her caravan some of Debbie's latest work.

It took a long time to get to know Debbie because she never pushed herself forward, but she was so well worth getting to know her.  She was one of those rare people that you could talk to while knowing that your conversation would remain totally private.  She was a listener rather than a talker.  After my husband died very suddenly, I started to go to crafting workshops, and Debbie often came with me.  During our travelling together, we would chat about anything and everything, not just crafting, but anything that concerned us.

It is no secret that Debbie's family was the centre of her life, and she was so proud of their successes in life.  She loved nothing more than to have her nephews and their young children around her.

Apart from her family, Debbie's other love was crafting.  Debbie and I had totally differing crafting interests.  Mine was stamping and parchment craft.  Debbie, on the other hand would bite the hand off anyone who was getting rid of an old redundant computer, and then turn them into masterpieces, and I believe she would raid her husband's (Phil) stash of Land Rover bits and pieces.  I could not get to grips with what she did.  If I was presented with the same heap of things as Debbie, by the end of the day, I would still have a heap of  apparent junk, while Debbie had something special.  I did try but never produced anything I wanted to keep.  Debbie did try hard to get to grips with my favourite craft of parchment, but it was not for her.  We each settled to appreciate  what the other did.

Debbie would do anything she could for anyone, producing wedding stationary, glorious wedding and other celebratory cakes.  She could have made a successful business, but never believed she was good enough.  No matter what any of us told her, that she was really talented, she never believed us.  The loss of her mother and later her father further reduced Debbie's self confidence.  She always thought she should have done more.

She hated photos of herself, and never really understood that she was beautiful inside and out.  She had a smile that would light up a room.  A really lovely person.

Posted by MaggieC (Silvercrafter) at 10:56

What a beautiful tribute Maggie. Debbie was a lovely person and will be so missed by family, friends and anyone whose lives she touched. Please pass on my sympathy to Phil, he must be devastated.

Welcome back, thank you for sharing the times you had with Debbie. I am so sorry for your loss of a friend. Seems so many here lose a spouse with no warning, and a really good friend means so much. May you find peace and know that she is watching as a bright star above.

A lovely tribute Margaret, I didn’t know that you knew Debbie’s parents too, what a nice long time to have known such a special person.

I too had to battle through a heap of new pages popping up with adverts to get to your post, the link took me to your last post about Shaz in 2021. Double gulp!

I hardly knew Debbie as a person but loved her art work. It was quite a shock to hear the news this morning. Take care Angela x9x

You seem to have some interference with your blog but I'm here now! What a lovely tribute to lovely Debbie. Hugs, Chrisx #18

In case you have not already left tributes to Debbie, her husband, Phil, has left her Facebook page and her blog (http://acrafterslife.blogspot.com/ ) open for us to leave our messages for her. If you try to get to her blog, it has the same weird problems as mine.

My name is Cindy said...

A lovely tribute for a lovely lady. Good to see you Maggie. Love n hugs, Cindyxx #10 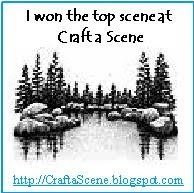 MaggieC (Silvercrafter)
Worcestershire, United Kingdom
My name is Margaret, and I was happily married to Geoff for over 43 years, until his devastatingly sudden death at the beginning of April, 2013. Both our children are now married and have given us lovely grandchildren to play with. I only got started on card making in about 2006. My craft room has now become a craft house, like many others of you out there. Crafting is so addictive but great fun.